6 Cannabis Cultivation Trends That You Should Know About

Marijuana farming in the US has undergone a lot of changes in recent years. Federal hemp legalization alongside more than a dozen states legalizing adult-use cannabis have been a boon for the marijuana cultivation industry, with a lot more winners than losers.

Here, we identify six cannabis cultivation trends over these past five years that may well provide an insight into what the next five years could hold.

But it’s not just large operators that are doing well. The marijuana cultivation industry is growing rapidly with new entrants trying their luck as growers, which means small operators are also on the increase. Cannabis farms with less than 5,000 square feet shot up by 5 percent between 2016 and 2021 from 34 percent to 39 percent.

The number of mid-size growers, however, decreased significantly. The number of operators cultivating anywhere between 5,000 and 79,999 square feet of marijuana fell by 20 percent in the past five years.

Though large cannabis cultivators appear to be consolidating their position in the market, small growers continue to be dominant.

The trend leans towards larger growers, but small cannabis cultivators still punch above their weight for now.

The number of growers operating one facility dropped from 66 percent in 2016 to 63 percent in 2021. This marginal decrease is reflected in the slight increases in the number of cultivators operating two, three or four grow sites which each jumped one or two percentage points.

The largest facilities with five or more grow sites remained unchanged at 6 percent.

It appears then that the number of facilities that marijuana cultivators operate is relatively stable for now.

4. Cannabis production area is on the increase

While the number of facilities operated by a marijuana cultivator hasn’t changed a great deal, the average production area is increasing.

Though the number of small cultivators grew over this time, the expansion of larger operators has driven this increase. The number of cultivation sites with a cannabis production area of more than 50,000 square feet grew by 15 percent between 2016 and 2021. 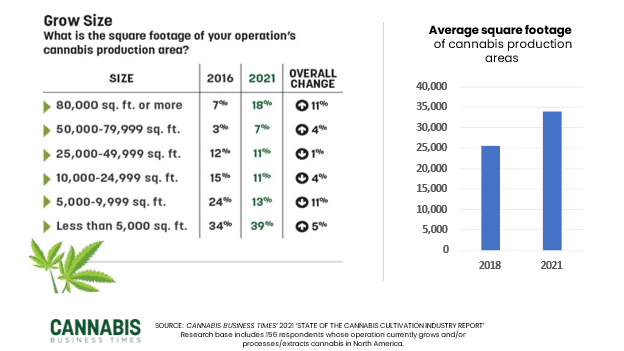 Every business needs to grow, and this seems to be especially so in the rapidly expanding cannabis cultivation industry.

Almost three-quarters (73 percent) reported they would add indoor, outdoor or greenhouse spaces to their facilities in the next two years. 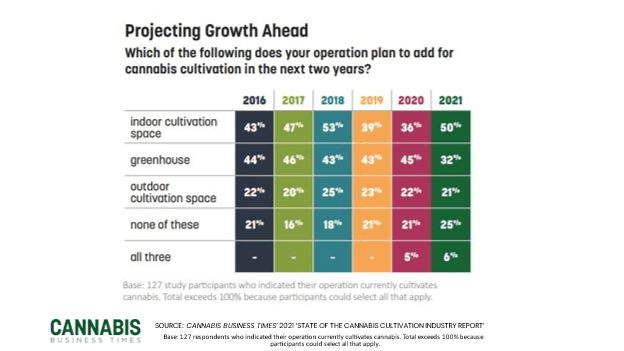 6. Majority of cultivators manage part of their supply chain, and this is set to increase

As well as growing cannabis, 44 percent of cultivators extract and/or process marijuana, while 27 percent also manage a retail dispensary.

Vertical integration can help with product quality and may allow growers to determine their own price point, so it’s perhaps no surprise that 26 percent of cultivators plan on starting a retail business in the next 18 months, while 16 percent want to start extracting and processing their own product within the same timeframe.