The pre-roll. Simple. Effective. This isn’t your average joint. The pre-roll, otherwise known as a professionally rolled marijuana cigarette, has seen a jump in popularity. Sales of pre-rolls were up 50% in 2020. If you thought covid-pandemic precautions would dampen pre-roll demand, you were wrong. In fact, pre-rolls were the second-fastest-growing product category. Flower was numero uno.

Headset, the Seattle-based analytical firm, released data that showed the increase in pre-roll sales in several key recreational cannabis markets: California, Colorado, Nevada, Oregon, and Washington state. It should be noted that Oregon’s numbers included both medical and recreational sales. Pre-roll sales jumped from $640.1 million in 2019 to $941.6 million in 2020. Pre-rolls in 2020 held a 10% market share. That was up from 9.5% the previous year.

Those are huge gains. LeafLink, the cannabis wholesale marketplace, also reports pre-roll sales are going up nationwide too. Sales in this category in all cannabis-legal states increased by 144% from January 2020 to January 2021. Pre-rolls comprised 7.94% of the total LeafLink market share in January 2021.

Pre-rolls are so basic, so rudimentary. Is that why this product category is doing so well? Here are some theories: 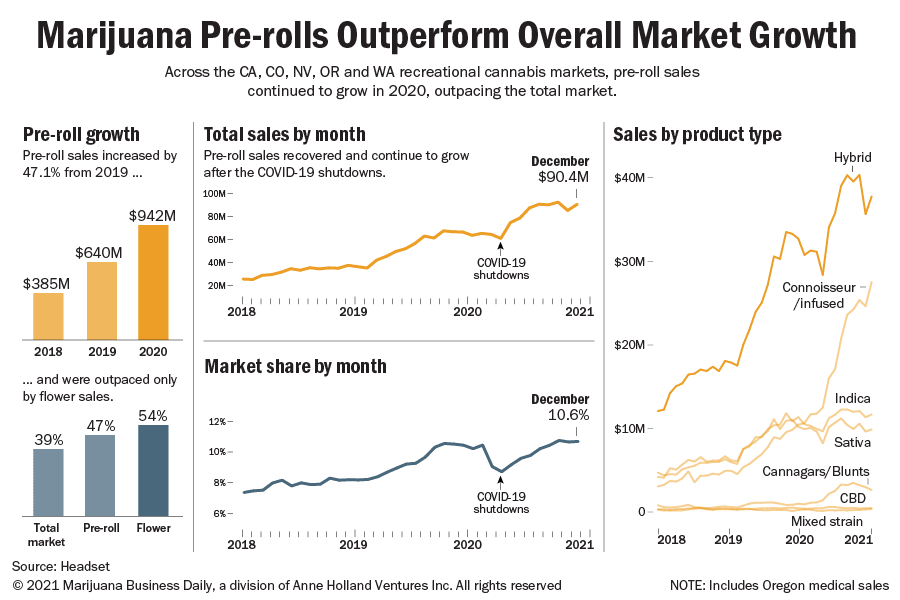 Where things start to get really interesting is when you factor in labor costs. Even though most of the pre-roll-making process is automated, the high-quality pre-rolls on the market use top-quality flower. Employees take those A-buds and methodically grind and separate them. That takes time. That time costs money. So while producers might not be as enthusiastic about the pre-roll, consumers just can’t get enough of them. And that might translate into increased sales in other areas — flower with its associated consumption mechanisms and accessories or new product categories — as customers get more familiar with the strains and dosage they prefer.

Jessica Ginet, who managed several Tier-II farms in southern Oregon, would help with pre-roll production once the harvest was complete. Their approach was similar to a wine flight. She said, “Customers loved the pre-rolls. Oregon had recently legalized on a recreational level, and the pre-rolls gave us the ability to create multi-strain packs for customers to sample.”

While each pre-roll was hand-finished with a tidy dutch crown, labor costs were cut significantly with a few critical pieces of machinery. The farm invested in a Futurola Knockbox, which could pump out 100 pre-rolls in ½ gram to 2-gram cones in less than five minutes. They also purchased a Futurola Super Shredder, which further automated the most labor-intensive processes by shredding or removing stems from pounds of flower at a time.

Not a hot dog

For tourists and travelers, pre-rolls are popular because they’re portable, discreet, and non-committal—all extra-important when in a new place and away from home. Tourists aren’t likely to lug a pipe or bong with them. New or inexperienced consumers might not have the know-how to turn flower and rolling papers into even burning joints. Pre-rolls fit the bill on so many levels.

To ensure the pre-roll you buy is quality, you generally get what you pay for. So, even if the pre-roll isn’t from a “brand name” with a ton of hype around it, for $20, you’ll almost always get a quality product. No longer considered the ‘hot dog’ of the weed world, consumers are savvy. They’ll quickly realize that the $5 joint they bought was filled with old shake and jump their price point a little to get finely curated flower and single strain pre-rolls full of tasty terpenes.

As pre-roll popularity skyrockets, so do specific strain phenotypes. The most popular pre-rolls contain a hybrid that blends various Indica and Sativa-dominant strains into new cultivars that hit the sweet spot.