From Medical to Rec: New Recreational Marijuana Markets Are Being Launched Increasingly Fast

Back when California legalized medical marijuana in 1996, a whopping 7,308 days passed from that benchmark to when recreational adult-use launched officially. That’s 20 years, in case anyone was wondering, and a sharp contrast to California’s reputation as a liberal state.

Despite the tortoise-like pace of California, western states have bravely fought for medical marijuana — starting in the ’90s, before advocating for recreational use.

According to data generated by an annual Pew Research Center study, public opinion has shifted regarding cannabis. In 2009, for the first time since the survey was conducted (1969), approval for legal marijuana was higher than the opposition to legalizing the “devil’s lettuce.” Not surprisingly, that upward trend continued through 2019, where 67% of respondents indicated they approved of the legalization of cannabis.

Thankfully, things aren’t taking over 20 years to happen. Well, that and the feds are more likely to look the other way as buckets of cannabis-generated tax revenue flood the coffers—money talks.

The tides are changing, from public opinion to legislative learnings to the lure of robust tax revenue. That means the length of time it takes from garnering medical marijuana’s voter approval to kicking off recreational sales is getting much, much shorter. This trend indicates that new adult-use markets should continue to launch but thankfully at a faster clip. 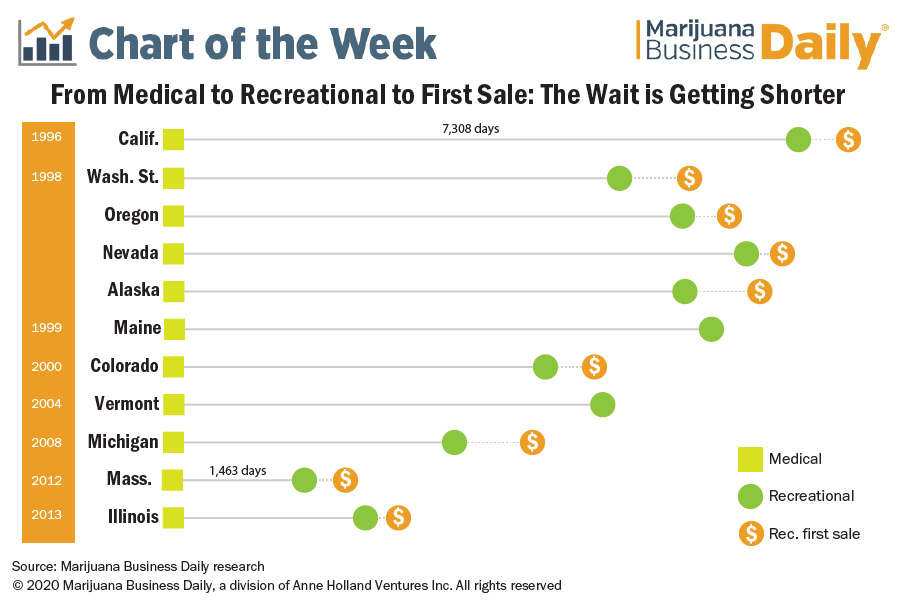 This pace is excellent news for states with medical marijuana markets that plan on offering adult-use, recreational cannabis, too. Companies won’t have to exercise patience for years while the regulatory framework is put into place. Still, they will have to be ready to pounce when the time arrives. This will favor those companies that are organized and have adequate capital to invest.

This pace isn’t great news for medical dispensaries, however. Existing businesses will have to quickly place themselves in an increasingly crowded market before rec takes a chunk out of their business. This is a plus, though, because these current operators will have the first chance to get their hands on a recreational license.

In stark contrast to California, the state of Massachusetts went from medical marijuana to adult-use sales in a brisk four years. That’s excellent news to states like Arizona, Montana, New Jersey, and South Dakota, all states with strong industry advocates — and those states are ready for a vote on adult-use legalization. South Dakota, however, is doing a “twofer” and voting on both medical and recreational marijuana legalization at the same time.