What does the future of hemp look like? The U.S. Department of Agriculture (USDA) released a report on February 5. The USDA attempts to answer just that, putting the finger on the pulse of the economic, legal and logistical challenges facing farmers during the transition to a legal era.

The report is titled, “Economic Viability of Industrial Hemp in the United States: A Review of State Pilot Programs.” The authors work hard to calculate industry viability as farmers try to cultivate and harvest a crop that hasn’t been grown in our country for generations. Its 83 pages try to draw conclusions about a newly legal (and often misunderstood) industry with spotty reporting. The data that was generated was interesting, however.

For example, the report included information, such as: “Under the pilot programs, United States industrial hemp acreage reported by States increased from zero in 2013 to over 90,000 acres in 2018, the largest U.S. hemp acreage since the 146,200 acres planted in 1943.” The USDA study also noted that “By December 2019, hemp could be grown legally in every state except Idaho, Mississippi, and South Dakota.”

It’s been a long road to legalization. After being paired with marijuana, hemp’s THC-containing lookalike, finally, in 2014, Congress approved several state-level pilot programs. These programs created limited research initiatives, which allowed growers in specific states to both produce and sell hemp. Then, expanding on those programs, lawmakers forged ahead in 2018 and ended hemp prohibition.

Then the boom started. In 2019, the USDA reported that almost 150,000 acres of hemp were planted. The actual figure could be much higher — the USDA relied on various means of communication for its data and included annual reports, website information, internal USDA data, third party information and random discussions with multiple state agencies.

The report also included data from those state-level pilot programs. Analysts concluded that while industrial hemp is an emerging industry in the country, it’s not likely to become an economic head-honcho in every state.

“As with other crops, it is not likely that hemp will be economically viable in every State,” the study concludes. “States that moved quickly to establish pilot programs were not leading producers of competing major field crops,” it found, and “growers are not likely to plant or process hemp if more profitable options exist.

One of the takeaways from the report is that one of the biggest industry hurdles is keeping everyone on the same page. Inconsistency between state requirements makes quantifying data tedious. This poses a challenge when, as noted by the report’s authors, “There is no systematic, comprehensive data source regarding the emerging United States hemp industry or requirement to report a consistent set of data for the pilot programs.”

A considerable issue revealed in the report was the “lack of basic data and information for decision-making.” Additionally, the study says, “States collected data at various times and levels of aggregation. For example, some States report hemp data by intended end use (i.e., grain, fiber, cannabidiol (CBD) or other extracts) while others do not report data.” 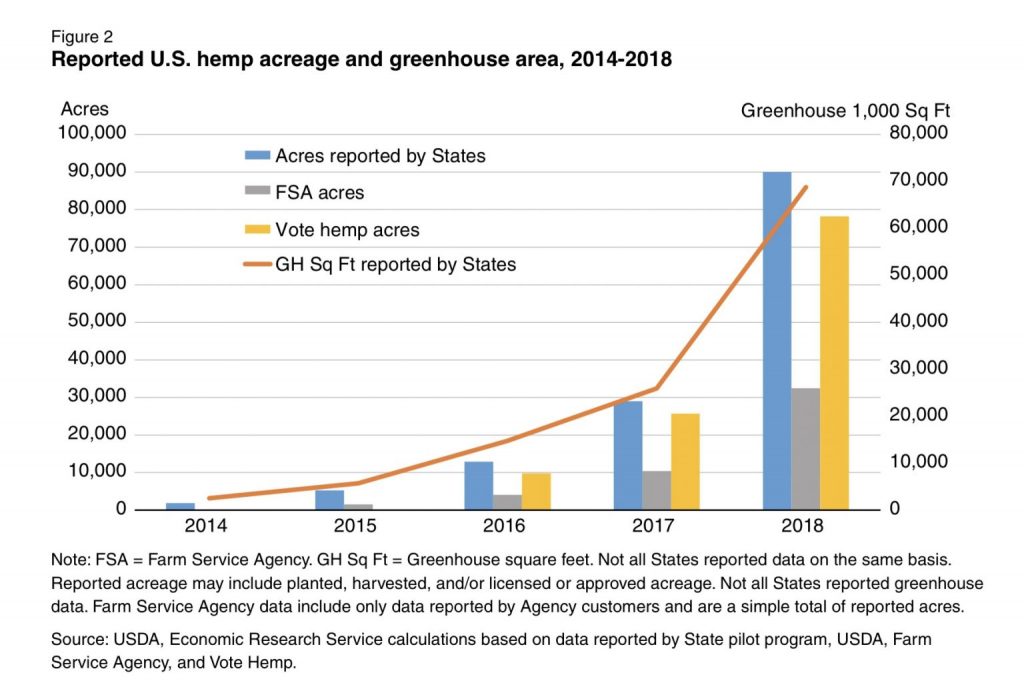 A recent international trade deal between China and the U.S. means that China has agreed to import a significant amount of ag products (hemp included) grown in the U.S. over the next two years. The surging popularity of hemp-derived CBD oil is a boon to the industry, along with increasing hemp demand for fiber, and use of hemp in extracts, cosmetics, and as food ingredients.

Hemp-producing states could also run into competition internationally, the report says, acknowledging that the U.S. is one of many hemp-producing regions globally. “While the reintroduction of hemp production in the United States is relatively recent,” it says, “hemp production has already been legal in other parts of the world,” including Canada, Europe, and China. 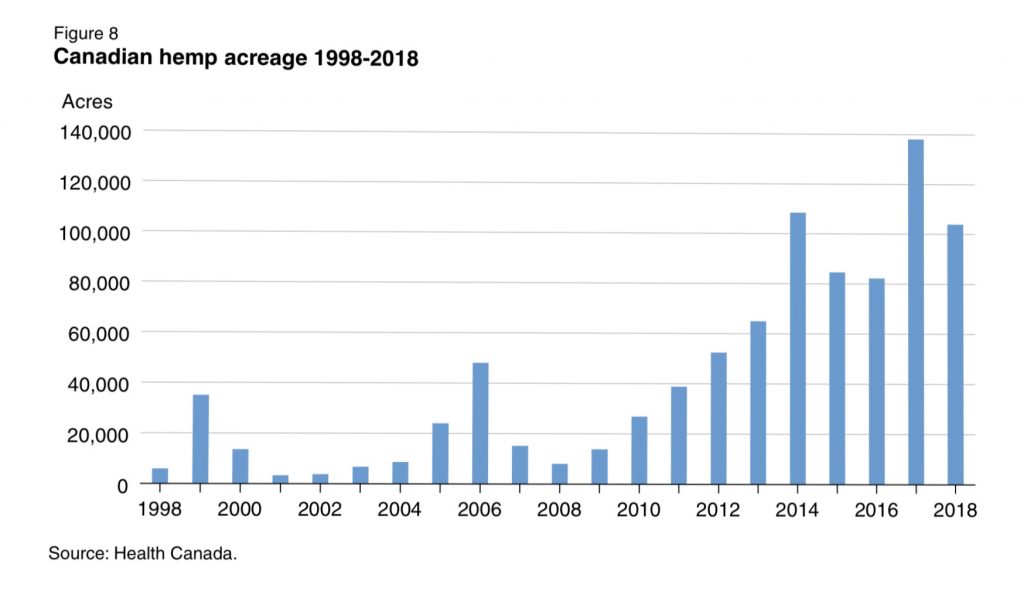 The full report can be read here.