A growing group of medical marijuana patients is calling for the resignation of DEA chief Chuck Rosenberg after he called MMJ a “joke.”

The Marijuana Majority, a national pro-reform group, launched a Change.org petition seeking Rosenberg’s firing or resignation. As of Nov. 12, the petition had gathered roughly 30,000 signatures.

Rosenberg’s comments came earlier in the month during a press conference. They immediately drew the rebuke of legalization advocates and civil libertarians.

Marijuana as medicine “is a joke”

“What really bothers me is the notion that marijuana is also medicinal, because it’s not,” he told reporters. “We can have an intellectually honest debate about whether we should legalize something that is bad and dangerous, but don’t call it medicine – that is a joke.”

In fact, ample scientific evidence has established, objectively, that marijuana is a highly effective treatment for multiple sclerosis, seizure disorders, nausea, wasting, and other conditions. Skeptics like Rosenberg who insist there isn’t enough science are simply denying the science that already exists.

In his remarks, he suggested that a non-intoxicating form of marijuana known as CBD oil may be useful for some patients. But he refused to acknowledge that THC, the psychoactive ingredient in the drug, has any medical benefits.

“There are pieces of marijuana, extracts or constituents or component parts, that have great promise,” Rosenberg said. “But if you talk about smoking the leaf of marijuana, which is what people are talking about when they talk about medicinal marijuana, it has never been shown to be safe or effective as medicine.”

The authors of the petition took issue with that, calling the comments “highly offensive.”

“President Obama should fire Chuck Rosenberg and appoint a new DEA administrator who will respect science, medicine, patients and voters,” the petition says.

The petition quickly drew the signatures of thousands of people, including musician Melissa Etheridge, who used medical pot during chemotherapy for breast cancer.

“My mom uses medical marijuana to find some relief when the pain in her legs caused by multiple sclerosis becomes too much to bear,” said Tom Angell, chairman of the Marijuana Majority. “So this medicine is no joke to my family, or to the millions of other families who have seen the benefits of doctor-recommended cannabis for themselves. And numerous scientific studies back up these experiences with data. It’s unacceptable for the Obama administration’s top drug official to be so ignorant of what science says about drugs.”

Safer than many opiate painkillers 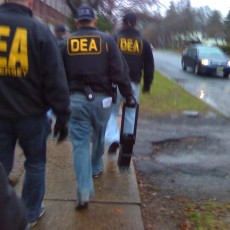 Repeated studies show not only that cannabis is effective but that it is much safer than many prescription medications, and much less addictive. Opiate painkillers have sparked a massive epidemic of heroin overdoses in the United States, a fate that could have been avoided with greater use of weed.

The DEA, naturally, stood behind Rosenberg:

“To clarify, Acting Administrator Rosenberg indicated that marijuana should be subject to the same levels of approval and scrutiny as any other substance intended for use as a medicine. DEA supports efforts to research potential medical uses of marijuana. To this end, DEA has never denied a registration request from anyone conducting marijuana research using FDA-approved protocols. Acting Administrator Rosenberg was also clear to point out there are a number of marijuana components and/or extracts which appear to show promise as medicines, but have not yet been approved as safe and effective. His comments reflected the fact that FDA has not approved any medicinal uses for smoked marijuana.”

The FDA mentions are a red herring. The real problem is not that marijuana advocates won’t submit the drug to the FDA, it’s that the federal government won’t let them submit it. The DEA has long been instrumental in blocking cannabis studies from receiving FDA funding or approval. Simply put, the agency will always insist the science is weak, no matter how strong it really is.