The deluge of bad press surrounding vape products has hurt cannabis vape sales, which in 2018 was the fastest-growing segment of the marijuana industry. Shares of vaping products in California, Colorado, Nevada and Washington in the recreational marijuana markets have dropped considerably after the first vape-related death was reported in August — the recent nationwide health scare as a result of several deaths and hundreds of illnesses attributed to vaping. These drops are outside the normal range of variation.

According to Headset, a Seattle-based cannabis data and analytics provider, California vape sales dropped 12% market share in less than a month. Likewise, Colorado’s share of vape sales dropped 24%. Cannabis consumers are moving their purchase dollars from vape-related products to other marijuana inhalables, like flower and pre-rolls. 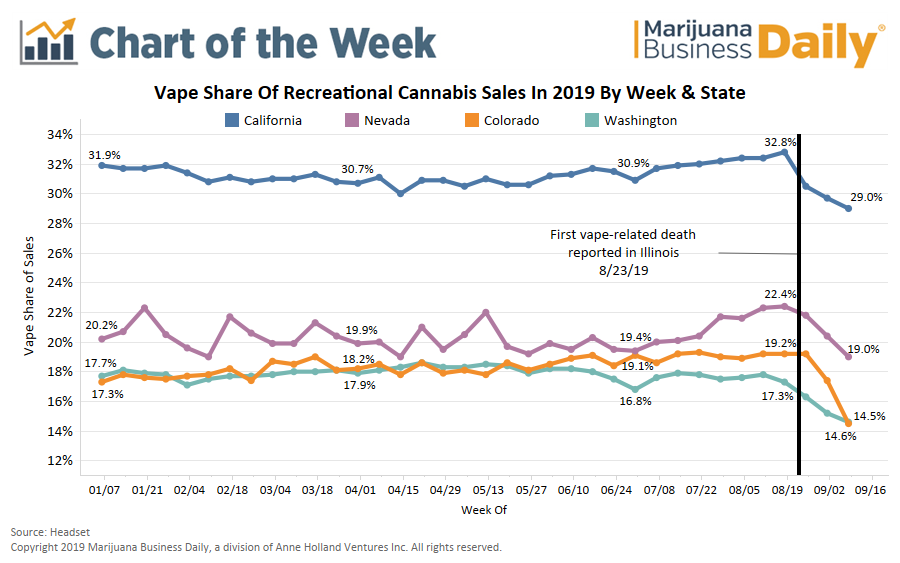 In Washington State’s recreational cannabis market, however, retailers are secure in the state’s rigorous seed-to-sale tracking system, and many are confident that their products are safe to use. And it’s not all doom-and-gloom, either; the total dollar sales of vape products are above where they were at the same time last year, this despite the negative publicity surrounding vaping cartridges containing propylene glycol and other additives. In fact, in the last week, vape sales seem to be stabilizing in major recreational cannabis markets nationwide. It remains to be seen how regulatory agencies will proceed with sales restrictions or bans on specific products or delivery methods, meaning the recent gains could prove short-lived.

The recent bans might shed light on if it’s the illicit or legal market that’s distributing these potentially harmful products. According to a CDC report, the bulk of consumers affected by the vape issue were from Wisconsin and Illinois and were as a result of using marijuana vape products from the black market, not the legal and highly regulated cannabis market. This is a striking distinction, and consumers should feel more confident in products purchased from the legal side of the industry.

Massachusetts has acted swiftly and stopped the sale of all tobacco and marijuana vaping products through January 25, 2020. Washington state is preparing for a four-month ban on all flavored vaping products (meaning every flavored vape product with and without THC). Likewise, the city of Los Angeles has threatened a proposal to ban all cannabis vape products.

Colorado is taking a different approach but sales are still sluggish; regulating bodies haven’t publicly discussed or implemented any bans or restrictions on vape sales. In a one-month period, from August 23 to September 23, vape sales have fallen 32%.

Headset attributes the decline to a prevalence of vertically integrated business models, which is prohibited in Washington state and uncommon in California and Nevada.

Vertically integrated operations are more than a retail operation — in fact, many grow cannabis and sell it in their own stores — meaning they don’t rely on outside suppliers. The result is a higher profit margin and an ability to eliminate third-party suppliers to provide products (like vape cartridges, for example). The higher margins incentivize the companies to sell their own products, and Colorado seems to be taking advantage of the recent negative PR on vaping to steer consumers toward purchasing flower.

Colorado retailers have jumped on the flower power bandwagon, handily steering consumers concerned about vaping safety to flower, with a side benefit: flower tends to have much higher margins because it was grown by the company selling it.

Some interesting numbers, courtesy of Headset:

It’s unknown if the recent spate of vaping regulation is just temporary or not, and how that relates long-term to the ability of the market segment to rebound back to sales numbers before the crisis. Stay tuned.