Legalization is already behind schedule in Washington State. Now customers can add a shortage of pot to the list of problems plaguing the state’s legal weed program.

Scientists at Analytical 360, a Yakima-based marijuana lab, say they’ve seen little of the drug as Washington nears July 8, opening day for the first legal pot shops. Analytical 360 is the only lab certified to test the product that will be sold in those shops.

“There’s such a small stream of samples coming through,” said Randy Oliver, chief scientist at the lab. “There’s going to be some long lines and some high prices.”

The state Liquor Control Board, which oversees legal weed, has also warned of impending cannabis shortages.

“Will there be shortages?” asked Randy Simmons, who manages the legal pot program for the board. “The answer to that is yes.”

Washington voters legalized recreational marijuana in 2012, along with voters in Colorado. The Liquor Control Board plans to issue the first 15 to 20 retail marijuana licenses June 7. The first few shops will open the next day, though the vast majority of stores will open later.

Seattle could have just one store on opening day. Board officials said it was the only shop in the city ready for a final inspection.

The state has issued 79 cannabis licenses, many to growers. But many of them aren’t ready to harvest.

So far, Analytical 360 has seen enough weed to account for only 190 pounds, hardly enough to satisfy the thousands of likely customers. That product “isn’t going to stay on the shelves very long,” Oliver said.

Scientists at the lab expect to see more pot in the last few days before opening. They’re they’re worried they could be swamped, though they don’t expect enough pot to prevent shortages.

“We can probably handle 100 samples a day,” Oliver said. “But if we get 300 samples thrown at us? I’m worried about everybody coming to us at the last minute.”

Software glitches could make the problem worse, Oliver said. The state uses a special program to track the marijuana from seed to sale. Scientists have had problems entering test results, and some product that passed inspection shows up as having failed.

Additional labs will open at some point, though it isn’t clear when that will be. Just two growers have had their weed tested at Analytical 360: Sea of Green Farms in Seattle and Kouchlock Productions in Spokane. 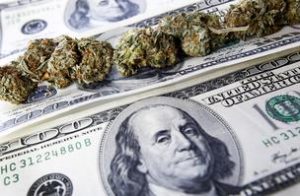 Both cultivation companies were licensed in March, among the first businesses to receive legal weed licenses. Sea of Green recently harvested 40 pounds of marijuana, said Bob Leeds, a partner at the company.

That pot is selling for $4,000 a pound, a steep price that could result in more expensive weed for consumers. Marijuana typically sells for between $8 and $12 a gram in the state’s medical dispensaries, with similar prices on the black market. Retail weed could cost $13 a gram or more after taxes, meaning an ounce that normally costs no more than $340 would sell for about $370 – or more.

That could encourage users to turn to the medical or black markets instead. And it could mean a serious blow to cannabis entrepreneurs.

“When people start calling, we have to tell them we’re not going to have anything for them until August,” Leeds said. “That’s a long way off when you’re trying to open a business.”