For Treasury Secretary Jack Lew, there is no ambiguity in allowing banks in the ‘legal’ states to conduct business with marijuana dealers, even as the drug remains illegal under federal law. In a testimony presented to a subcommittee of the House of Representatives Appropriations in April 2014, Lew defended Washington’s decision to allow banks to deal with marijuana entrepreneurs, and even the issuance of guidelines for such transactions. The secretary also said that allowing banks to deal with marijuana dealers did not constitute federal approval of the drug and that the guidelines provided by the Treasury’s own financial crimes division would help “shed light” on the burgeoning marijuana trade in Colorado and Washington State.

Federal influence over the banking industry’s dealings with the marijuana market will definitely work in the government’s favor, while providing many benefits to the marijuana community as well. Before the establishment of clear-cut federal guidelines regulating the way banks did business with marijuana dealers, licensed dealers had no choice but to deal in cash. For Lew, this meant more opportunities for money laundering and other illegal activities. With greater federal control over bank transactions involving marijuana businesses, Lew feels that the marijuana industry is much less likely to resort to these activities.

Not everyone agrees with Lew’s assessment. The chair of the House Appropriations Committee Harold Rogers termed the move a “rubber stamp” for an industry that is still essentially illegal in the greater part of the country. For Rogers, allowing banks to do business with the marijuana industry would only provide criminal drug dealers an opportunity to benefit from the United States banking system. He was also opposed to allowing Washington banks to do business with marijuana dealers even though most remain unlicensed, comparing them to “drug dealer(s) on the street corner”.

But Lew insists on the benefits of the new system, saying that it will help the government keep closer tabs the growing marijuana industry. Even now, some banks have begun to identify suspicious activity that may be related to illegal dealings within the marijuana industry. By providing banks with guidelines for dealing with marijuana related businesses, Lew feels that the potential drawbacks of restricting marijuana dealers to cash transactions can be minimized. 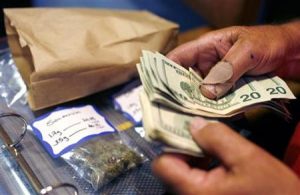 Not all banks are eager to become involved with the marijuana industry, regardless of the new government guidelines. The most significant issue is the fact that marijuana is still illegal under federal law. But many in the banking industry are also wary of the rigid guidelines for dealing with marijuana businesses, conformance to which would be too costly for most banks to deal with. Even more discouragingly, there is no guarantee that conforming to these guidelines will protect banks from federal prosecution for becoming involved in the marijuana trade.