Tobacco Corporations: Keen To Enter Marijuana Industry In The 1960s/1970s?

It is hardly any secret that many large corporations are now exploring the considerable potential offered by the legal marijuana industry. However, what is lesser-known is that certain Big Tobacco companies were just as eager to enter into the fray as far back as the late-1960s and the early-1970s. Newly unearthed evidence shows that while the earliest incarnation of the “War on Drugs” (still a pervasive aspect of Western society today) was sweeping the United States care of the Nixon administration, tobacco giants such as Phillip Morris were secretly positioning themselves to become major players in an industry that they perceived to be the next Big Thing.

Although the Nixon government was firmly opposed to the idea of marijuana legalization in the 1970s, there was a perceptible shift in the public’s attitudes toward that direction back then, much as there is today. It was this public opinion that encouraged large tobacco companies to explore the possibilities of the marijuana industry, as proven by recently discovered documents dug up from University of California archives of tobacco company documents. One of the most recognizable of these companies – Philip Morris – even requested marijuana samples from the government’s antinarcotics division for purposes of research. 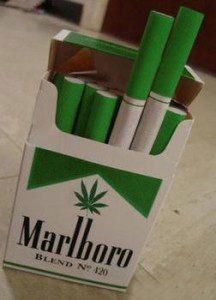 The announcement of the discovery of these documents – which was made in health policy publication Milbank Quarterly – is especially significant considering that many of the circumstances that may have encouraged tobacco companies to explore marijuana in the 1960s and the 1970s are again coming to the fore today. Some Wall Street analysts and legalization proponents have even surmised that tobacco corporations may again be exploring the possibility of entering the legalized marijuana industry four decades after the Philip Morris request.

As to why the tobacco industry pulled out of the legal marijuana market, many surmise that it has to do with the shift in government policy toward marijuana. Although many states indicated support for legalization from 1973 to 1977 – Jimmy Carter himself was elected on suggestions made during his campaign that he would support marijuana decriminalization – the tide shifted dramatically with the election of Ronald Reagan.

Although the interest of tobacco companies in exploring marijuana seem to have died out in the 1980s, documents show that at least one company – R.J. Reynolds were planning on further research into marijuana’s chemistry in the early 1990s. At present, all major tobacco companies categorically deny being engaged in any type of marijuana-related research.