Cannabis sales in the US are expected to increase by 35% in 2019, and are forecast to surpass the $12 billion mark by the end of the year. These exclusive market projections and more are detailed in the 7th edition of Marijuana Business Factbook, courtesy of the Editors of MJBizDaily.

According to the data, the biggest gains predicted in 2019 and beyond are in the recreational market, and notably, the anticipated rec sales for 2018 were boosted a bit from what was initially forecast at the start of 2018. 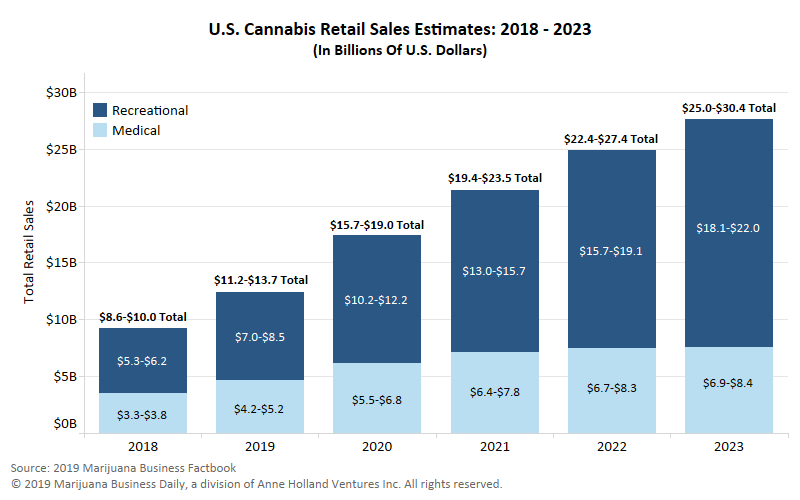 In California, initial glitches with state and local governments, including high taxes and local licensing limitations, made doing licensed recreational business difficult there. The state’s huge recreational cannabis industry moved slowly, finding it hard to compete with the established black and gray market side of the industry.

California found its equilibrium at the close of 2018, however, and ended on a high note, with estimated sales beyond $2 billion. The correlating data attributes this to a rise in delivery services and an increase in the number of licensed retail stores.

While medical cannabis sales are anticipated to continue at generally the same pitch as 2019 recreational sales, analysts predict the long term growth of the medical market will slow down considerably.

This is in spite of strong patient demand in new medical markets in Florida, Maryland, Ohio, Oklahoma and Pennsylvania. The Factbook attributes the initial surge in medical marijuana sales in these states primarily to a wide variety of patient-qualifying conditions and accessible dispensaries.

As more and more states legalize medical marijuana, the opportunity for growth is diminished. Additionally, there remains a small number of states (including South Dakota, Wisconsin and Wyoming) that do not allow medical use. These states do not have any pending medical marijuana legalization on the horizon, which further reduces overall sales.

The rate of growth slowed down a bit in established markets in Colorado, Oregon and Washington. Those states are expected to post single-digit annual sales gains, a first in the recreational cannabis industry, but despite slower upward growth, those markets should continue to expand. On the flip side, rec sales are set to explode by 2020, as Maine and Michigan roll out recreational cannabis, and California and Massachusetts mature and grow.

Delaware, Illinois, New Hampshire, New York, Rhode Island and Vermont are all actively looking at legalizing recreational cannabis, and by 2023 the folks at MJBizDaily predict total retail cannabis sales in the country to reach $25 billion to $30 billion per year, three times higher than annual sales in 2018.