The irony is thicker than smoke: An Oregon prosecutor who publicly opposed the measure to legalize weed is now the official in charge of running the state’s legal pot program. 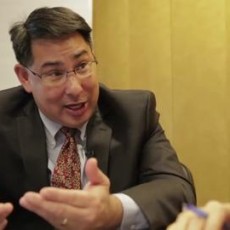 Klamath County District Attorney Rob Partridge, chair of the Oregon Liquor Control Commission, promised after the election to “make this measure work Oregon’s way.” His record on the campaign trail, though, suggests he may not be happy doing it.

Though Partridge never officially took a position on Measure 91, the Oregon District Attorney’s Association voted to oppose the legalization initiative when it appeared on the ballot Nov. 4. An investigation by the Huffington Post uncovered emails from other prosecutors staking out their opposition, but Partridge’s office didn’t respond to the site’s request for information.

Still, the Bend Bulletin in Bend, Ore., reported that the ODAA vote was unanimous. Different prosecutors voted against the measure for different reasons, but they all voted against it, the newspaper said.

Attempts to enforce marijuana blood limits in drugged driving cases have failed elsewhere because the body metabolizes alcohol and THC differently. As alcohol is metabolized, it leaves the body rapidly; that process mirrors the speed with which the body becomes intoxicated and then sober again.

But THC leaves the body at a much less predictable rate. Inactive THC metabolites can remain in the bloodstream for days or even weeks after use, while alcohol leaves no trace after just a few hours. A “sobriety” test based solely on metabolite levels doesn’t really test sobriety at all – it merely tests the level of an inactive compound that lingers in the blood long after intoxication.

You can be perfectly sober and still fail a cannabis “breathalyzer” exam, in other words. But Partridge doesn’t seem to understand this. He didn’t, at any rate, when he explained his problems with Measure 91 in October.

“Just like .08 is there for alcohol, that is not included in this particular measure,” he complained.

“You can be a producer, a distributor and a wholesaler and sell, so you can . . . hold all four licenses,” Partridge said, failing to note that the Liquor Control Commission he heads already allows exactly that with alcohol licenses.

Earlier this year, Partridge insisted in another interview that Oregon wasn’t ready for legalization.

Following the election, Partridge took a more tempered approach, saying the state should impose only modest regulation on the market. It remains to be seen whether the one-time opponent of legalization will be able to effectively see it enacted.

“We don’t need excessive regulation,” Patridge said shortly after the election. “By the same token, our goal is to protect public safety so we don’t make edibles attractive to kids and we don’t do things that other states have stumbled with.”