NYC Marijuana Activist- I Swapped the Flags on the Brooklyn Bridge

A longtime cannabis activist in New York claims he was responsible for replacing two American flags atop the Brooklyn Bridge with white flags last month.

On July 22, someone scaled the two 276-foot towers that anchor the famous bridge and switched out the American flags above each. They apparently climbed the structure undetected, raising new fears of terrorism. 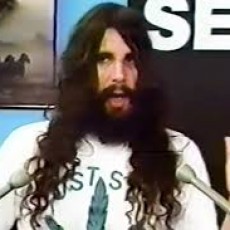 On July 30, pot advocate Rev. Bud Green posted a note on his website claiming responsibility. Police, however, didn’t appear to give his claim much credence.

“It was interesting that nobody knew what to make of it,” Green told the New York Daily News. “It was interesting that people took it as a terror risk. We believe in nonviolent civil disobedience. The government has everybody scared shitless. Was Martin Luther King Jr. a terrorist? Was Abbie Hoffman a terrorist? The government is trying to silence people.”

Green said he dreamed up the stunt earlier in July, after “people in New York” contacted him about an Independence Day blog post.

“The people who contacted me are big Obama supporters and they’re disappointed in him,” Green said. “He fed the military-industrial complex.”

The flags had no obvious connection to legalization or marijuana. But Green said the original plan called for placement of two more flags at a later date. One would feature a large green cannabis leaf on a white flag with the words, “Don’t Tread on Me.” The other would display the logo of General Electric covered with a swastika, with guns and bombs in the background.

Green said he focused on GE because the company owns NBC.

“The government, the media, they control the flag, and that flag is bullshit,” he said. “It doesn’t stand for freedom. It stands for tyranny.”

“We’re only looking into him because it came to our attention,” the official said. “I’d be surprised if it turned into anything. I doubt this guy’s story has a lot of credibility.”

Even so, a spokesman for the NYPD said the department would investigate. 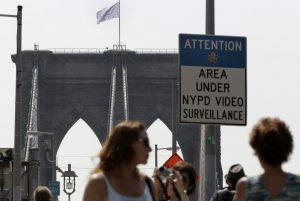 “We are going to follow up on this as we have the others at this point,” Stephen Davis said. “We are going to give it the kind of look we have given any other tip that has come along. Then we will decide whether to pursue it or not.”

The switch-out caught New Yorkers by surprise and led to new concerns about the safety of the iconic bridge. Green said he came up with the idea but left the groundwork to unnamed “professionals.”

New York officials ramped up security on the bridge after the incident, while many worried that terrorists could easily scale the towers and wreak havoc. No other suspects have been named.