New TV Ad Could Be First to Sell Marijuana

Legal marijuana is about to get a wider audience. A company in Canada has produced what it calls “the world’s first marijuana commercial.”

And local ads for pot are common in places such as Colorado and Washington State, where recreational marijuana was legalized in 2012, and in California, where medical pot has been available since 1996.

But the new Canadian ad may be the first commercial for an actual cannabis product to be scheduled for wide broadcast. The spot, which hadn’t aired as of mid-July, was first shown on YouTube.

The commercial shows a man walking into a liquor store and asking for something that comes from “a plant that grows out of the ground.” An irritated employee tells the man he should settle for a legal “liquid alternative.”

“You know, the [liquid alternative] that leads to violence, social problems, the occasional gruesome death,” the clerk says.

The man, stunned, says, “It’s 2014, man, and you’re telling me I have no other choice but to consume these dangerous products?”

At that point, the ad introduces the Crop King, a mascot for Crop King Seeds. That’s the product on sale: seeds used by legal medical marijuana patients to grow weed.

Medical pot has been legal in Canada since 2001, when the nation’s courts ruled that the government must provide the drug to patients. The government has taken a hostile position on that ruling, especially the current Conservative government of Prime Minister Stephen Harper.

The same hostility exists in the United States, where the federal government routinely prosecutes business owners who sell pot in compliance with state laws.

The notion of a mass-media advertising campaign for marijuana is still rather far-fetched in the United States. Less than half the country lives in places where weed is allowed for recreational or medical use, so a nationwide commercial is unlikely anytime in the immediate future.

Crop King Seeds operates out of Vancouver, British Columbia. The company sells cannabis seeds to cultivators, including patients who grow at home. Pot seeds are legally available in Canada, unlike the United States, where every part of the cannabis plant is illegal. 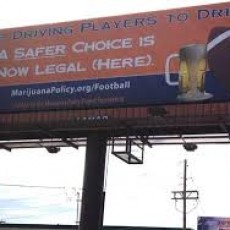 But that state of affairs probably won’t last forever, and mainstream marijuana ads could soon be making their way across the border into the United States.

They should have a receptive audience. More than half of American voters say they favor legalization in national polls, while many others are softening their views of marijuana as a dangerous drug.

California was the first place in the Western Hemisphere to adopt a medical marijuana program. Since then 22 other states, the District of Columbia, Canada, Argentina, Guatemala and Uruguay have approved MMJ, while Colorado, Washington, and Uruguay also legalized recreational weed.

Alaska and Oregon could vote on legalization in November, and public support in both states is relatively strong. Voters in the District of Columbia could also choose to legalize, though that vote would require the approval of Congress.