The War on Drugs runs on fear, plain and simple. From the early days of marijuana prohibition, with its Reefer Madness and racial politics, to the military might of the modern DEA, terror has served the nation’s anti-weed movement well.

Now a major pro-marijuana group is fighting back against the fear. The Marijuana Policy Project has purchased billboard space in Phoenix and is running an ad that targets scare tactics with humor and fact.

MPP, the largest pro-weed group in the world, is using the billboard above Seventh and Lincoln streets to sell a message: Irrational fear is the only reason to vote against legalization.

Arizona voters could vote on legalization

Arizona voters could decide next year whether they want to allow legal pot. Activists are already gathering signatures to put the issue on the 2016 ballot, and MPP is working to boost support.

If the proposal makes the ballot and wins voter approval, the state would join Colorado, Oregon, Washington, Alaska, and the District of Columbia as one of the only places in the United States where cannabis is legal for all uses.

In addition to those states, another 33 permit some form of medicinal cannabis, including Arizona. The state has had a full MMJ program since 2010 when voters approved it by a narrow margin.

Support for legalization has been strong in recent polls, suggesting the idea may pass when it reaches voters. But there is also a ruthless law-and-order wing to Arizona politics, exemplified by notorious Maricopa County Sheriff Joe Arpaio, and that spells a tough fight before reformers can declare victory.

Anti-weed crusaders are already building up steam. Yavapai County Attorney Sheila Polk serves as vice chairwoman of Arizonans for Responsible Drug Policy, an anti-pot organization whose members include police and prosecutors. Polk is behind a new effort to sink legalization even before it reaches the ballot.

The MPP billboard takes direct aim at Polk and her campaign of fear. Like other anti-weed crusaders, the group notes, she peddles in misinformation and baseless anxiety. The idea behind the ad was to poke fun at that ghost-story mentality.

“Marijuana is illegal thanks to decades of anti-marijuana propaganda and fear-mongering,” said J.P. Holyoak, chairman of the billboard campaign. “Once people find out it is actually safer than alcohol, they tend to agree it should not be a crime for adults to use it responsibly.”

Terror has long been the backbone of the century-old campaign to eradicate marijuana from the planet. It started in the early 1900s, gained steam under a new federal narc squad (now the DEA), and reached its full glory in 1937 with the nationwide prohibition of cannabis for any use, even hemp. 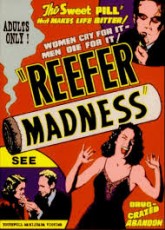 Reefer Madness went into wide release the next year, and its dire warnings added to a growing body of propaganda designed to scare Americans away from weed, the people who used it, and the politicians who said the rules were too rigid.

The next 70 years were a near-constant stream of hyped-up horror stories about cannabis use. But times are changing, and the fear mongering no longer works on young voters. They’ve smoked weed, their friends have used it, and they’ve never seen anyone hurt by it. These are the voters MPP hopes to reach with its billboard, in part by riffing on the lurid movie posters that once advertised Reefer Madness.

“Over the next 12 months, our opponents are going to do everything they can to scare Arizonans into keeping marijuana illegal,” Holyoak said. “We just want voters to remember that we’re talking about a substance that is proven to be less harmful than alcohol.”