Add this to the growing list of clever marijuana offerings: a cannabis food truck.

Entrepreneurs in Washington are following in the food truck craze and stocking a converted school bus with pot-laced edibles. The truck opened for business in late June.

Seattle-based MagicalButter.com is behind the so-called Samich truck (Savory Accessible Marijuana Infused Culinary Happiness). The company sells a $170 kitchen appliance for cooking with weed, and the truck is a ploy to promote that product.

Right now the goodies are only sold to medical marijuana patients. When retail weed goes legal in July, the truck will sell edibles to all adults.

The menu includes a range of edibles, from pot PB&Js and truffle popcorn to Vietnamese pork banh mi and a turkey sandwich called Danksgiving. The products contain a relatively potent dose of THC, 100 milligrams, divided into smaller servings.

Portioning of marijuana edibles has become a topic of concern across the country. Colorado recently enacted rules requiring separate single-serving portions and setting a potency level for each serving. 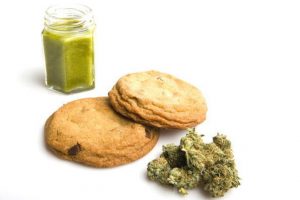 Magical Butter’s chief executive and truck operator, Garyn Angle, said the business currently falls into a legal gray area because it only serves medical marijuana patients. Things could change when retail weed goes on sale. The first store licenses will be issued July 7, with pot shops opening the next day.

The Washington Liquor Control Board hasn’t said whether food trucks and restaurants will be licensed to sell edibles. But those businesses won’t be allowed to serve food that requires refrigeration or heat.

That means Angel may have to avoid hot foods and some THC-laced beverages. Still, he said, diners should prepare for a unique experience.

The food out of the school bus will cost more than your average food truck fare. That’s to be expected, of course, since the truck is selling a federally controlled substance. The truck will also sell regular food.

“This will be a high-end meal either way, but our infused entrees will cost around $10 more than a typical entree,” Angel said. “If you go to a restaurant where something would normally cost $15, you could expect to pay $25 at our place.”

The Samich truck first rolled out of the garage in Denver April 20. It parked at the MMJ Universe Farmers Market in Black Diamond over the Jun 28 weekend.