Maureen Dowd is the marijuana gift that keeps on giving. 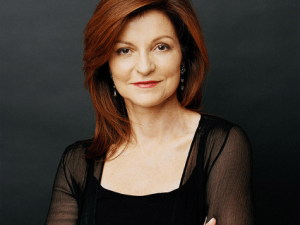 Earlier this year, Dowd penned a breathless account of a panic attack that followed too much weed chocolate. She described her intense paranoia and anxiety in excruciating detail, including the fear she would be busted for being a bad pothead.

The column argued that the United States needs better rules for edibles and other forms of concentrated cannabis. Critics quickly pointed out that Dowd’s experience is easily avoided by using edibles carefully. And the episode passed without leaving any permanent damage.

A national pro-cannabis group decided to roll with the joke, buying a billboard that showed a Dowd lookalike sitting on a hotel bed with her head in her hand. “Don’t let a candy bar ruin your vacation,” the ad said. “Consume responsibly”

Then, when Christmas rolled around, the Marijuana Policy Project, the nation’s largest weed advocacy group, decided to go a step further. They issued a holiday card using the same image, but with a Christmas tree and a crackling fire in the background.

“Don’t let a candy bar ruin your holiday,” the card reads, with “Merry Christmas” in seasonal font. Dowd didn’t immediately respond to the card. But she has played along with the joke so far.

Humiliated by the stoner scene

After Dowd received a torrent of humiliation from the stoner community, Willie Nelson came to her rescue, inviting her to join him on his tour bus for a toke. She went, though she was coy about whether she actually smoked up with Willie. He had some advice for her: Be careful with the edibles.

“Honestly, I don’t do edibles,” Nelson said. “I’d rather do it the old-fashioned way, because I don’t enjoy the high that the body gets. Although I realize there’s a lot of other people who have to have it that way, like the children that they’re bringing to Colorado right now for medical treatments. Those kids can’t smoke. So for those people, God bless ‘em, we’re for it.”

Dowd’s initial column came after she visited Colorado earlier this year. She bought marijuana candy at a Denver pot shop, including a chocolate bar.

Back at the hotel, Dowd ate a small part of the bar. But like many first-time users, she became frustrated when the drug didn’t take effect initially. Edibles usually take at least half an hour to have an effect.

Dowd then ate more of the chocolate bar, until she had eaten enough to send her on a nasty panic trip. After the pot finally took effect, she assumed the fetal position on the bed and didn’t move for the next eight hours. She said she feared the police would bust in at any minute and arrest her for being bad at marijuana.

It’s a safe bet this wasn’t Dowd’s first experience with cannabis, but it made enough of an impression that she presented it as evidence of the dangers of pot. She has since clarified her stance, saying she supports legalization.