Marijuana: The Best Investment Option Of The Decade?

In a development that few would have expected or considered only a few years ago, marijuana is fast shaping up to be one of the most promising investment opportunities of the decade. With the growing shift toward more tolerant cannabis policies and the spread of legalization, numerous financial opportunities have opened up in the marijuana market. For those looking for investment opportunities that offer the potential for favorable returns in the future, the marijuana industry may just be the way forward.

Many in the industry are optimistic of marijuana’s investment potential. CEO Todd Harrison of the online financial media firm MInyanville, has called cannabis the “best investment idea” of the decade. Like many who support legalization, Harrison points to marijuana’s potential to raise millions of dollars in tax revenue in the coming years. Harrison is especially optimistic about the state of legalization in Colorado, claiming the state as the proving ground for wider spread legalization across the country.

With 20 states and Washington DC having already legalized marijuana for medical use – and several others expected to follow suit in the coming years – the marijuana is expected to generate considerable revenue in 2014 and beyond. In a report published by cannabis investment and research company, Arcview, it was claimed that the marijuana industry would grow significantly from its present rate of $1.44 billion a year to $2.34 billion a year in 2014. This represents a projected 64% growth rate in the industry.

Although the marijuana market isn’t yet widely accepted as a legitimate industry by Wall Street, the road to wider spread legalization will likely result in greater mainstream acceptance of the industry as well. And while the industry currently seems headed toward penny stocks, many proponents of legalization are optimistic of bigger and better things for the marijuana industry. Harrison himself warns potential investors away from marijuana penny stocks, citing their volatility and riskiness, and instead points to legitimate firms such as GW pharmaceuticals. Having invested in the cannabinoid prescription firm, Harrison claims that stocks in the company has increased in value by over 500% since the previous summer. 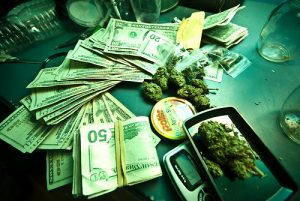 Many observers have drawn parallels between the investment potential of the marijuana industry and the dot com boom of the turn of the millennium. Some suggest a more cautiously optimistic approach to the marijuana industry, citing warning about the possibility of an initial boom followed by a devastating crash. Harrison himself warns investors to expect ebbs and flows in the industry.

Others are even less encouraging of the industry. Professor Mark A.R. Kleiman of the University of Southern California does not expect a lot of money to be made in marijuana, which is essentially an agricultural commodity. With wider spread legalization in the offing, Kleiman expects the prices of marijuana to fall as the market becomes more competitive.