Map Shows Where Weed Is Cheapest

How much does weed cost where you live? A new map produced by The Washington Post shows just how cheap marijuana is in some parts of the country – and just how expensive it is in others. 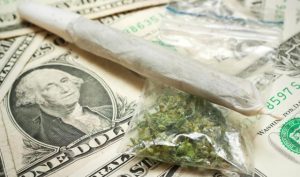 The data, drawn from the crowd sourcing site, priceofweed.com, shows that pot is cheapest on the West Coast, the Southwest, and the lower Midwest. Even some states in the Deep South have relatively low prices.

Marijuana costs the most in the Upper Midwest, the mountain states, parts of the South, and the Atlantic Seaboard. Four states have especially high prices: Wyoming, South Dakota, Nevada, and, surprisingly, Vermont.

In those places, the average “joint” costs more than $4, according to the Post. The newspaper’s survey measured a single joint as 0.4 grams – but that’s about the size of a toothpick, so a real joint might be closer to 1 gram for $10.

The most expensive weed is sold in Nevada – a strange result, considering that state has one of the nation’s more liberal medical marijuana laws. There, a small 0.4-gram joint costs $5.20, which means residents pay about $13 for the kind of joint real people smoke.

If you’re looking for the cheapest dope, you’ll need to move somewhere unexpected: Oklahoma. There, a joint with a gram of weed is a downright bargain at just $5.

Keep in mind, however, that Oklahoma has some of the toughest anti-marijuana laws in the nation. Possession of any amount there comes with a potential one-year jail sentence. So you could end up paying a lot more than that weed is worth – assuming you get caught.

Prices don’t always correspond to the legal state of cannabis in any given state. A one-gram joint in Colorado costs $7, while the same joint in Washington State costs $6.80. Both those states legalized weed in 2012.

In California, where the medical marijuana program is just a step away from full legalization, a joint costs $6.85. But several deeply conservative states beat all those prices, including Arkansas, Oklahoma, and Kentucky, in all of which a typical joint costs less than $7.

The Post survey found another intriguing fact in its research on weed prices. Marijuana, it turns out, is relatively cheap compared to beer.

In Oklahoma, that $5 joint costs less than a six-pack of Bud Light. And any stoner knows a gram of good bud will make you feel better than a sixer.

In Kentucky, the $6.50 spent on a fatty could instead buy seven 12-ounce bottles of Bud Light. And in Arkansas, a $6.45 joint could buy you 7 and a half bottles.

The ratio in Washington and Colorado is a bit higher, despite the advent of legalization. There, prices in legal pot shops started high and haven’t dropped substantially since.

A $7 joint in Colorado is worth more than eight bottles of Bud Light, while in Washington $6.80 spent on a joint could instead buy seven and a half bottles.

The map suggests marijuana reform doesn’t necessarily lead to lower prices. Many of the most expensive states have decriminalized weed possession or allow medical marijuana.

In Minnesota, where cannabis was decriminalized decades ago and MMJ was adopted earlier this year, the price of a joint is $10.37, which would buy almost a 12-pack of Bud Light. Vermont decriminalized and allowed medical weed, yet there the price of an average joint, $11.35, would pay for more than 12 beers.

It may seem like you could get a lot more beer for your dollar, and it some states that’s true. But the price of weed is likely to keep dropping, and it’s worth remembering that marijuana is far healthier than booze, so even if you’re paying a premium, it’s worth it.