Legal Marijuana In Colorado: Implications On The Economy

It seems that every month brings with it news of yet another state that has taken the bold step toward legalizing marijuana. Twenty states and the District of Columbia have already legalized the substance for medical use (soon to be joined by New York state), and Colorado and Washington state have gone a step further and legalized even the recreational use of marijuana.

Apart from the supposed medical benefits of marijuana, the most compelling arguments for its legalization involve its supposed benefits on the economy. Although it is true that marijuana can potentially raise much-needed dollars for the government, the reality is that doing so isn’t quite as simple as it may seem.

In theory, legalization of marijuana should bring down the costs of production drastically, and bring about a free market where anyone can grow marijuana. By taxing it as well, money that would have gone to illicit marijuana growers and suppliers will theoretically end up in government reserves. But there are factors that can prevent the government from seeing the money, the tax policies of individual states, the changing market habits of buyers and sellers, and the confusing state of mountain range legalization all over the country.

One obstacle standing in the way of more profitable legalization is the high price of legal marijuana compared to the black market price. In Colorado, the price of marijuana has increased significantly to $400 versus the $150 to $250 that a similar amount would fetch in the black market. 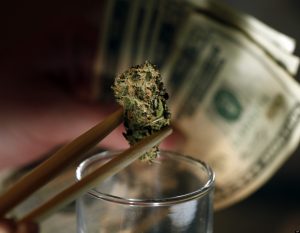 When you consider the hefty taxes piled on top of every transaction–which in Colorado is 15% for wholesale and 10% for retail–the reality of raising revenue by way of the legal marijuana industry becomes a bit murkier.

Of course the factors that have brought about the outrageously high prices of marijuana–insufficient inventory and new consumer demand, among others–will ease up after some time. However, entrepreneurs who wish to maximize profits will have to consider selling better quality product in order to compete. When the market normalizes, the price of high-quality legal marijuana may not be all that different from the price of similar quality product in the black market. Given these high prices, it would seem that there is little incentive for users to go for legal marijuana, when the alternative is cheaper and better.

There is also the issue of actually levying the appropriate taxes on marijuana. In Washington State, marijuana is already subject to an 8.75% sales tax. However, an additional 25% excise tax would be levied in each phase of bringing the product out on the market. Altogether, the taxes will bring about a 37% increase in the sale price of marijuana. Given the resulting high prices of legal marijuana, patients and recreational users may just opt to get their medicine from black market sources instead.

But the biggest issue remains to be the continued federal government regulation of marijuana. As long as state governments and the federal government have different views on marijuana legalization, tax collection for the new industry will not be as optimal as it could be.