On October 2, 2014, officials in Illinois released figures on applications for medical marijuana businesses in the state. The figures indicate where the competition for permits for cultivation centers and dispensaries–which are limited in number–will be especially fierce. As expected, there are indications of intense competition in certain areas, but little–and even no–competition in others. 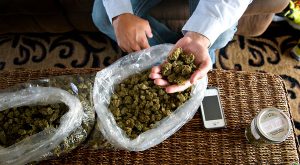 The state Department of Agriculture office received 159 applications for the planned cultivation facilities. Of these applicants, only 21 will be awarded licenses, corresponding to the number of Police districts in the state.

In districts where no applications have been received, the new Illinois medical marijuana program will hold another application period. The date for this second application has yet to be announced.

Central Illinois was also a popular draw for aspiring cannabis entrepreneurs. In District 9, which encompasses Sangamon among other counties, eight applications have been received for the single available cultivation center license. In District 10, which covers Champaign and a few other counties, 11 applicants are vying for the single available license.

Southern Illinois also had a significant number of applicants. In Alexander and Pulaski countries to the south, seven different individuals and organization are interested in securing the single available license. Up to 60 permits may be granted by the Illinois Department of Financial and Professional Regulation, which has so far received 214 applications for dispensary licenses.

Given the interest in the cannabis industry in Illinois, many expect only good things ahead for the state’s population of medical marijuana patients and the state itself. Already having proven its worth as a revenue generating industry in Colorado, the budding marijuana business in Illinois may just put some much needed revenue in the state’s coffers.

For Bob Morgan, who is the medical marijuana program coordinator in the state, the variety of applications from all over the state bodes well for in terms of geographic distribution. This will almost certainly give more patients easier access to the medication that they need at more reasonable prices.

As with most other states that have legalized medical marijuana, Illinois patients will need a written certification from a physician as well as a background check. A medical marijuana card in Illinois will cost $100 a year, with veterans and disabled patients paying only $50 a year.