The Elections Are Over; What’s Next for Weed?

Marijuana reform is spreading, and there doesn’t seem to be much that can stop it. Nov. 4 was a landmark moment for cannabis policy in America, with two new states and the District of Columbia legalizing weed for adults over 21.

But what does this mean for the future of legalization? What states are likely to end prohibition next? Is national legality on its way? When will we see it?

For all the impact of 2014, 2016 is likely to be the biggest year yet for legal weed. Several states are likely to vote on legalization, and the odds look good. Pro-pot campaigns are underway in a handful of states that aren’t likely to legalize in two years, but most efforts are targeted at states ripe for reform.

California is the biggest prize sought by marijuana advocates. The state almost voted on legalization this year, but efforts to put the question on the ballot failed to raise the money they needed to succeed.

Instead, most serious proponents decided to wait until 2016. Voters will choose a new president that year, and presidential elections tend to attract many more young voters – exactly the kind of people who smoke weed and support reform.

A group of high-profile marijuana proponents are already working to draft a cannabis amendment that would appeal to a wide swath of voters. This year’s proposals were relatively free of regulation and may not have been able to win a majority vote at the ballot box.

If California adopts reform, weed will become legal for all the state’s 24 million adults. The Golden State is the most populous in the country, and the advent of legal pot there could spur legalization nationwide.

Other states are in the running to end marijuana prohibition. The New York Legislature will consider legalization next year, and Rhode Island’s lawmakers may not be far behind.

For 2016, ballot initiatives are underway in Arizona, Nevada, and Maine. Activists are also planning to push for legalization in Texas, Missouri, and Wyoming, though those states are long shots at best.

Advocates could also circulate reform petitions in other places. The odds of success have increased dramatically since Colorado and Washington State first legalized pot in 2012. 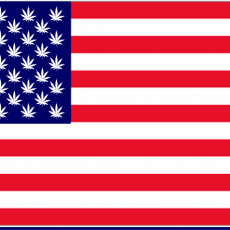 Polls show most Americans think legal weed is inevitable, both where they live and elsewhere in the country. One recent survey showed three quarters of voters expect legalization soon.

A Republican Congress will make reform more difficult at the national level, but not impossible. Even some conservative lawmakers favor reform, and President Obama has said he’s open to change.

The biggest lingering question is when, exactly, the whole of the United States will legalize. It’s coming, and it’s coming fast, but it will still be years before legalization stretches from coast to coast.