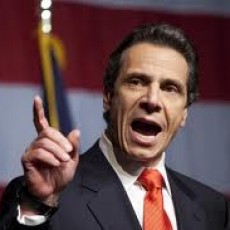 New York is one of 23 states to adopt medical weed. But the law has an unusual provision, one first adopted in Minnesota: Patients will not be allowed to smoke pot. Instead, they’ll have to use vaporizers, pills or concentrates.

That rule, on which Cuomo insisted, was critical in winning his signature after the bill passed the legislature. It was adopted for health reasons, but primarily because Cuomo believed it would prevent illegal trafficking of bud.

“This new law takes an important step toward bringing relief to patients living with extraordinary pain and illness,” Cuomo said. “The legislation I am signing today strikes the right balance between our desire to give those suffering from serious diseases access to treatment, and our obligation to guard against threats to public health and safety. I applaud the lawmakers and advocates whose efforts over the past years were crucial in making medical marijuana a reality in New York State.”

The law allows for as many as five businesses to sell medical pot to patients. Each company may open up to four dispensaries, for a total of 20 across the state. Patients will get recommendations from participating physicians.

“From this day forward, New Yorkers will now have access to the same life-changing treatment that other patients across the country have had,” Savino said. “This is an historic victory for the countless health care professionals, physicians, advocates, families, and patients who know that the safe and reliable use of medical marijuana is a sensible, compassionate course of treatment for debilitating illness and disease. I stand with the thousands of New Yorkers who now will no longer have to suffer needlessly through their courageous medical battles.”

Cuomo signed the bill quietly in a subdued ceremony at the New York Academy of Medicine in Manhattan. Both houses of the legislature passed the legislation in June, at the end of the legislative session. The governor had until midnight July 5 to sign the bill.

Cuomo announced his own medical marijuana program in January, using his executive authority to bypass a long-reticent legislature. That program would have been more restrictive, with only a handful of hospitals authorized to dispense cannabis.

But lawmakers eventually approved a more liberal program. Cuomo agreed to sign the legislation only after they added the smoking ban.

Actual medical weed is still a long way off, though. The state won’t begin dispensing cannabis until early 2016.