How’s this for a merry Christmas? A Chilean woman was arrested when it turned out her blue-ribbon holiday tree was really a giant pot plant. 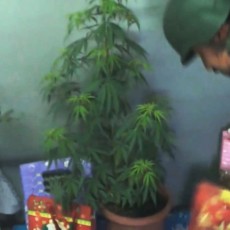 Angelica Navarro Pereira, 50, was busted in the southern province of Maipo after bragging to other residents about her enormous Christmas tree. Neighbor Renato Quinonez Alfaro said Pereira told him she had the “best Christmas tree in the world.”

“Thinking about it, she didn’t invite me in to see her tree,” Alfaro said after the arrest. “I don’t remember her taking one in. Now I know why.”

“The place was full of drugs,” a police spokesman said. “We had been investigating this woman for over a month. We suspected she was involved in trafficking and when we had enough proof we carried out our raid.”

Pereira’s downfall may have been her inability to keep her splendid tree to herself. Reports didn’t indicate who turned her in, but it was clear she had talked the plant up more than once.

In case it needs to be said, you should not use your favorite pot plant as a Christmas tree. That’s just a waste of a good pot plant.

Also, you should probably not brag to your neighbors about your cannabis plants unless you live in a place where they’re legal – or you know your neighbors also grow weed.. Not everyone sees the world the way you do, and some of those people would be happy to rat you out.

Chile is relatively forgiving when it comes to marijuana crimes. Weed is banned everywhere in the country, but simple possession in a private home is generally allowed.

Latin America is the next big frontier for cannabis reform. The nearby South American nation of Uruguay legalized the drug last year, though the program may never get off the ground.

Still, a giant weed Christmas tree is a hard sell even in Chile. Pereira would have done better to use a real tree or, better yet, keep her prize “tree” to herself.