Weed has been legal in Colorado for more than a year and a half, and shops have been selling the drug to users for seven months. A new report suggests that time has been well spent.

The report, written by a fellow at the Brooking Institution, said Colorado officials have been “largely successful” in implementing the new marijuana laws. That’s a big accomplishment, considering the dysfunctional politics at the federal level, the report said. 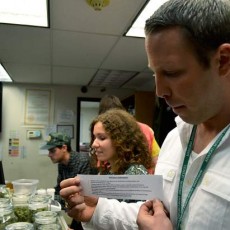 “That was the most surprising, I think – how mature opponents were and how willing to work with the other side they were – in at least a national political environment where that’s unheard of,” said John Hudak, the fellow who wrote the 20-page report.

Hudak said he thinks that Colorado has done a good job of enforcing and regulating the program – but not necessarily that it’s a good idea. The report wasn’t intended to judge the political or moral worth of legalization, only to gauge the effectiveness of the industry and the officials overseeing it.

More data is needed to determine what impact legal weed will have, good or bad, Hudak said. But the state has clearly carried out legalization successfully, he said.

The report praised Gov. John Hicknelooper for helping build the program after voters approved legalization in 2012. For example, his creation of a task force to implement the law was a big success, the report said.

The governor worked hard to make the new policy work, despite his initial opposition to legalization, Hudak wrote.

“All told, what happened at the Department of Revenue and the new Marijuana Enforcement Division was a wholesale administrative reorganization – never an easy thing to achieve, especially in a political environment,” Hudak wrote.

Though pot is legal in Colorado, it’s illegal for any purpose under federal law. The threat of federal intervention compelled state officials and the weed industry to play by the rules, Hudak wrote.

Even police departments, long focused on busting stoners, have evolved, the report noted, with officers undergoing training to deal with legal marijuana.

But not everything about the state’s enforcement has been fully effective, Hudak wrote. Edibles are often poorly labeled and inconsistently portioned, making it easy for users to overdose.

Hickenlooper signed a law in May designed to deal with some of those problems. In early August a task force issued proposed new rules that would require clearer labeling, consistent dosage, and single-serving portions. But Hudak said there’s more to be done.

“In my own trip to a retail marijuana dispensary, I observed a couple interested in purchasing a marijuana brownie,” he wrote. “The ‘budtender’ explained in detail to the buyer that the brownie contained six servings and that proper consumption involved dividing the brownie or biting off a small chunk. The information was correct and clear, but who eats a sixth of a brownie or a quarter of a candy bar?

“Moreover, people who smoke, dab, or vape marijuana experience the effects quickly. However, edibles can take 30 to 60 minutes before the consumer feels a ‘high.’ As a result, an individual – particularly one unfamiliar with marijuana edibles – may over-consume, believing the product is ineffective. Overconsumption can have negative consequences.”